Delta #EpicPowerFail 5 : Grady Cameron on RNZ : How many Asset Management Plans does it take to get a Real One ?

Readers, your correspondent has nothing new to offer tonight —but just many examples of what we already knew : Delta/Aurora chief excutive Grady Cameron treats the facts with almost radioactive distaste, and is completely willing to say and do anything to save his own skin. Now, we have a “polemic” of evidence.
Rob Hamlin is correct – there is a massive coverup underway. Let us consider Mr Cameron’s cancerous comments on RNZ with Guyon Espiner today :

The new Aurora plan with an extra $26M was ‘nothing to do with Richard Healey’ ….The board already had a plan in place because “back in September I went to the board and advised them that I wasn’t happy with the progress of our current plan in terms of how fast we were getting through the replacement programme” …. and “the plan that was announced yesterday was the revised plan”.

Now there are several obvious problems here, and the first is Mr Cameron’s mealy-mouthed dissembling that “back in September” he went to the board. September was only 5 weeks ago, and, just 4-5 weeks or so before that, in April 2016, at a cost of hundreds of thousands of dollars, Mr Cameron released Aurora’s long term Asset Management Plan (AMP), all 185 pages of it for the period 2016-2026. The specific purpose of this doorstop is to schedule “asset replacement”, and the plan of course specifically provides for pole replacement. Mr Cameron is asking us to believe that the very next week after the 10-year AMP was complete, he woke up and thought ‘Good grief ! We have completely messed up the asset management plan we have just had the board sign off, and which we have just spent months on ! We must re-do it immediately and add $20-30M to pole replacement ! That is Job #1 Today…. (after mid morning madeira cake and my daily PR strategy meeting). Readers, there are many at Delta who will confirm that Mr Cameron’s GM of Capability & Risk Matt Ballard, was instructing staff the exact opposite…. “that under no circumstances is the current $2.96M budget for pole replacement to be exceeded, for ANY reason, and GET USED TO IT”. 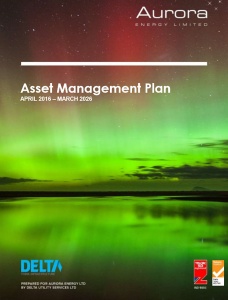 In the fantastic event that there is any shred of truth to this rubbish from Mr Cameron, he needs to be sacked for incompetence, because he has just shown he is incapable of producing an asset management plan that is credible or even somewhat reliable. It is so bad that Mr Cameron could be accused of numeric dyslexia. How can a board comprised of accountants, to whom forecasts and numbers are religion, put up with this ? Is it because Mr Cameron has promised them Mutually Assured Destruction if he was removed? There is plenty of evidence and emails to show that far from wanting to resolve this, Mr Cameron and his enablers wanted to play the man and sweep this under the rug, an approach that continues to the present day.

Your correspondent has received information that provides the translation code for Grady Cameron’s weasel worded dissembling “back in September I went to the board … not happy with the progress”. It is this : Mr Cameron advised the board ‘We employed incompetent staff who claimed they could “reinforce” poles for around $1200 each, to give a maximum 10-year extra life, but this $1,200 was a figure pulled from their own fevered imaginations and staff and contractors have told us to take a hike, it will cost around $3,000, which compares VERY unfavourably with the cost of a straightforward new pole with a 50-year life at around $5,000. Being the desperate incompetents we are, we had latched onto this half-baked and untested theory like a barnacle on a boat hull and assumed we could reinforce more than twice as many poles as we needed to replace over 10 years. (7290 reinforcements vs actually replacing just 3381 poles).’ (Readers, see Page 78 of the Aurora AMP). ‘If we do a half-baked reinforcement approach we have another budget problem of $13M, but if we put in all new poles we will have a blowout of around $28M (over and above the apples vs oranges $26M issue I deceived the board about earlier).’

Grady Cameron confidently stated to the nation that the plan unveiled yesterday “was the revised plan” (the board had approved)…. For about three seconds, and then when queried by Guyon Espiner incredulously “so nothing at all to do with Richard Healey ?”, Mr Cameron went into high range reverse and forward mode – at the same time. He responded “NO…. the plan that we’ve we put forward is a more aggressive plan now….” due to “a significant amount of public scrutiny”. Memo to Mr Cameron : The public scrutiny only started because Richard Healey broke ranks and blew the whistle, to the cost of his career.

Your correspondent thinks that Grady Cameron is also fevered and mainlining on dividends. If Mr Cameron was telling the truth, that he had concerns, and a plan that very coincidentally was the same as Richard Healey’s then why did he cancel the meeting with Richard Healey who wanted to discuss his concerns about the state of the network ? He should have been saluting a fellow soldier, not burying him…. Instead of refusing to meet with him, why did Mr Cameron discuss taking legal action against Richard Healey when Mr Healey was still an employee of Delta ? (Yes we know about this Mr Cameron, you have very few allies left within Delta —perhaps you should be looking next to you and channelling Shakespeare ….et tu, Matt Ballard?). Instead of cancelling the meeting, why did he not send an email to say, ‘Dear Richard, I have some fantastic news, all or most of your concerns are solved, we are going to be announcing a huge increase in pole spending of tens of millions of dollars immediately (just as soon as I can arrange the requisite saturation PR coverage that portrays me in the best possible light and take the focus off the Noble debacle). I would be delighted to meet with you for 3.5 minutes at 10.36am after mid-morning espresso and madeira cake to outline this to you. Your humble CEO, Grady.’

It is often the little things that give the game away…. And try as they might, the PR minders can never control the interview process. Grady Cameron spent several minutes explaining to the country how this was just a misunderstanding and he had – before Richard Healey (!), realised what was wrong, and he and the board had a plan to fix the very things that Mr Healey was complaining about. Guyon Espiner asked near the end, “Do you thank Richard Healey for putting pressure on you for this ?” ie for helping Grady Cameron receive great exposure in the media to explain his hitherto secret new plan to the nation, very similar to Mr Healey’s, that all was well, the network was aged but safe, lots of poles were being replaced. Instead of “Come back Richard, my fellow safety conscious soldier in arms, all is forgiven,” we and the country heard his CEO mask slip and got the real, petulant Grady Cameron who snarled “No I don’t thank Richard Healey” —proving that this was all just a charade, and Mr Cameron and the board were ropeable that they had been exposed as ineffectual and incompetent guardians of the region’s electricity network.

Continuing down the charade theme, consider this final thought for the evening, readers – Cameron, Crombie, and the board of accountants announced this plan WITHOUT ONE CLUE AS TO HOW IT IS TO BE FUNDED. This is sheer arrogance and disdain for power consumers and ratepayers – what other public expenditure of this level has ever been announced with no discussion about who or how it will be funded. The board of Delta and Aurora have proven yet again, how incompetent and derelict in their public duty they have become.

27 responses to “Delta #EpicPowerFail 5 : Grady Cameron on RNZ : How many Asset Management Plans does it take to get a Real One ?”