### ODT Online Mon, 15 Aug 2016
Old stadium site ruling questioned
By David Loughrey
The company that owns the former Carisbrook Stadium site in South Dunedin is calling on the Dunedin City Council to scrap a 10.5m setback suggested for its Burns St frontage. Calder Stewart says the setback will cover 1963sq m of land worth about $600,000, and will not provide the benefits suggested in the second generation district plan (2GP). The company took its concerns to the 2GP hearings last week, as a hearings committee considered what the next district plan will look like. […] Research undertaken by the University of Otago had shown South Dunedin had a low population of native birds because of a lack of habitat, and planting of native or exotic trees there would provide a valuable habitat resource.
Read more 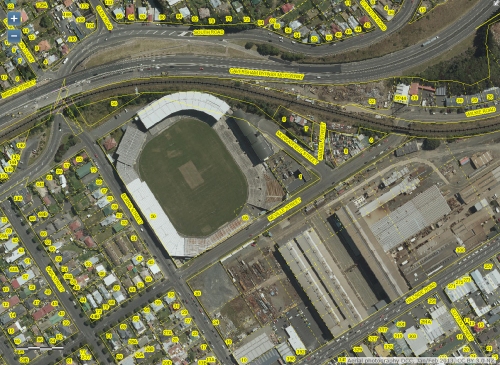 Carisbrook was a major sporting venue in Dunedin, New Zealand. The city’s main domestic and international rugby union venue, it was also used for other sports such as cricket, football, rugby league and motocross. Carisbrook also hosted a Joe Cocker concert and frequently hosted pre-game concerts before rugby matches in the 1990s. In 2011 Carisbrook was closed, and was replaced by Forsyth Barr Stadium at University Plaza in North Dunedin.
Floodlit since the 1990s, it could cater for both day and night fixtures. Known locally simply as “The Brook”, it has been branded with the name “The House of Pain”, due to its reputation as a difficult venue for visiting teams.
Located at the foot of The Glen, a steep valley, the ground was flanked by the South Island Main Trunk Railway and the Hillside Railway Workshops, two miles southwest of Dunedin city centre in the suburb of Caversham. State Highway 1 also ran close to the northern perimeter of the ground.
Carisbrook was named after the estate of early colonial settler James Macandrew (itself named after a castle on the Isle of Wight). Developed during the 1870s, it was first used for international cricket in 1883, when Otago hosted a team from Tasmania. It hosted rugby union internationals since 1908 and full cricket internationals since 1955.
The stadium was home to both the Highlanders in Super Rugby and Otago in the ITM Cup through each side’s respective 2011 season. It is also the former home of Otago cricket, which moved to the University Oval at Logan Park in the north of the city after the redevelopment in the early 2000s, and also of Otago United Football team in the New Zealand Football Championship, which moved to the lower-capacity Sunnyvale Park for the 2008–09 season.
█ Read more at https://en.wikipedia.org/wiki/Carisbrook