Gerrard Eckhoff does us All a favour 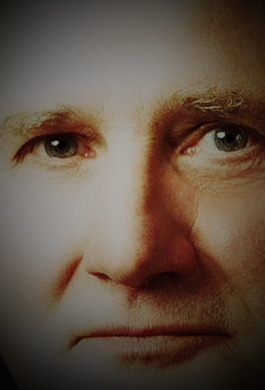 The Dunedin City Council’s decision to develop a rates remission policy to take into account the special relationship Maori have with the land is interesting, writes Gerrard Eckhoff.

### ODT Online Wed, 27 Jul 2016
DCC rates policy may be unfair to Pakeha landowners
OPINION All Dunedin City Council ratepayers will, I’m sure, be sympathetic yet intrigued to understand the principle the council has employed that allows for rates remission for Maori freehold land and not producing revenue (ODT, 19.7.16). It is a policy that will be embraced by most, if not all, ratepayers, as it sets a wonderful precedent. Cr Hilary Calvert sensibly noted DCC staff should develop policy which included non-Maori land as well for consideration.
Read more

● Gerrard Eckhoff, of Central Otago, is an Otago regional councillor.

DCC Rates history
The table and graph [go to the webpage] show the comparison between inflation and Dunedin City Council rate increases over the past couple of decades. For the first two years, the changes which followed local body amalgamation in 1989 mean it has not been possible to accurately calculate the DCC rates increase figure. Major upgrades in the areas of water and wastewater, and significant building projects, have had a big effect on DCC rates rises over the period.
█ http://www.dunedin.govt.nz/services/rates-information/rates-history 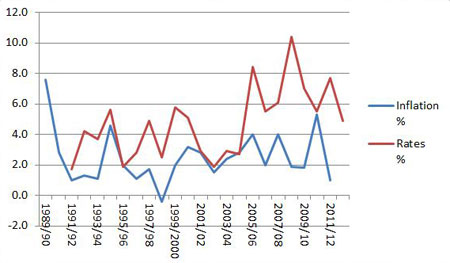 This graph is a cumulative graph of DCC rates rises after inflation has been removed, graphed over the same range that the DCC graph is, with this year’s data added (and a couple of mistakes in the DCC’s inflation rate touched up to.match the Reserve Bank’s, they are minor, and mostly cancel out). 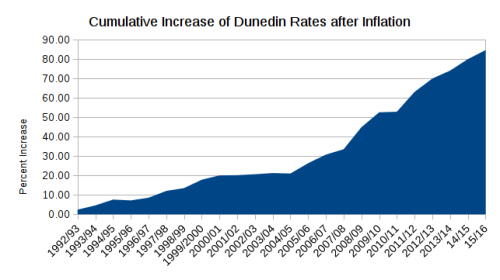 17 responses to “Gerrard Eckhoff does us All a favour”