City Council not the healthy democracy we crave #Delta

We have lost more than one useful community-orientated local body politician to the bullying green sludge running this council. No one quitting the council table these last weeks has been exactly forthright about that, until now. Each has been raising points in common with Councillor Calvert, privately and publicly, in their own way.

Over the last 18 months in particular, Councillor Calvert has been on her game with work and enquiry, and yes, regrettably, only a small part of which can be shown via recorded council meetings; but that says more about Mayor Cull’s chairing and questionable efforts at maintaining political control – as Councillor Vandervis will attest.

Indeed, most of council politics presents behind scenes in non public, but also Covertly as ‘Politics’ has always done —except this time, the public beneficiaries of the fabrication and obfuscation are increasingly irate with not only the dangling Mayoral Chain but also his rather awful menagerie of toothy accomplices and mouldy sidekicks.

The lack of public faith in these numbskulls has brought on a seething concentration of ill will, exasperation and litigious-minded wrath such that Anything could happen, and may, before and after the October elections. Typically, for Dunedin, this goes somewhat understated. But it is real, not imagined. Presbyterian attendance to the cost of unbridled war is uppermost…. until the last ganglion strains and bursts.

With the problems besetting South Dunedin caused by DCC and ORC lamebrains…. there has never been a more Simple time to gain a Strong Majority of sincere and principled elected representatives willing to work hard for the whole of Dunedin City. Cull is eroding public confidence. Walk right over the top of him and the greenies – for Our better future.

Last word: Hilary Calvert, please stand for the Mayoralty and the Council in the 2016 elections.

The big issues for ratepayers – cycleways, fraud, what council-owned companies were doing, and maintenance of mud-tanks – were “never on the agenda of council meetings until a rearguard action happens after the problems are identified by others”. –Cr Hilary Calvert

### ODT Online Wed, 20 Jul 2016
Disillusioned with council
By David Loughrey
Dunedin city councillor Hilary Calvert announced yesterday she will not stand in this year’s elections, but not before taking parting shots at some of her colleagues and Mayor Dave Cull. […] She said she was unable to make a difference in a council dominated by councillors “whose focus is on carrying out activities for the benefit of the planet and on advising central government on how they may go about their business, not ours. This preoccupation has been at the expense of the proper and transparent governance of the city.”
Read more

The following was forwarded to me by a city councillor. I subsequently obtained Cr Calvert’s permission to publish.

Dear Councillors,
For your information please find attached a response to a LGOIMA request made by Cr Calvert related to Delta and Gold Band. 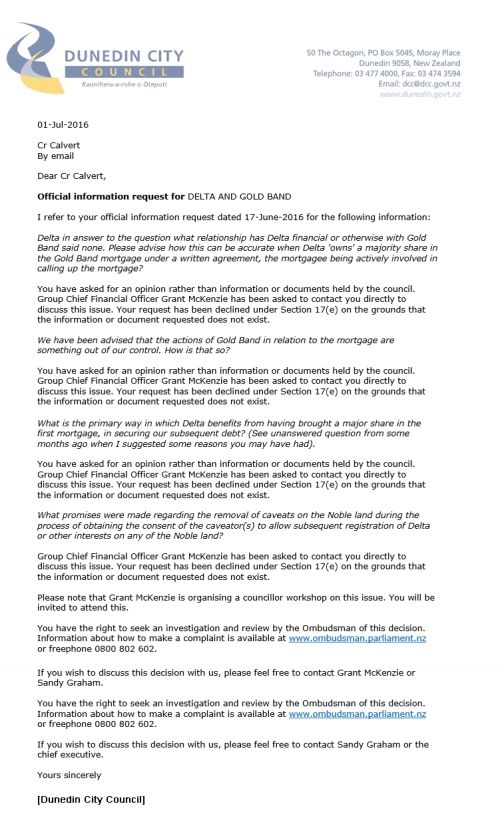