So we’re going to play it this way #SouthDunedinFlood 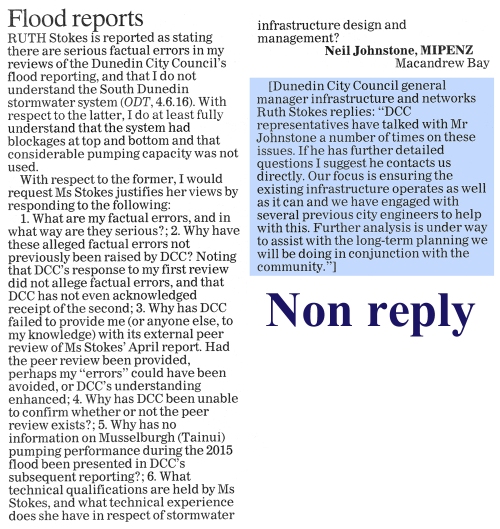 1. The claim of “factual errors” is surely able to be substantiated or thrown out by a suitably qualified (named) EXTERNAL peer reviewer acceptable to DCC and engineer Neil Johnstone. The ‘matter of degree’ (serious ?) is a matter for the peer reviewer to comment on. As are issues of professional competencies —which only an independent and transparent peer reviewer with nationally recognised engineering expertise can deal to. Not an in-house operational.

2. Neil Johnstone has issued three reviews, two of these deal to DCC’s formal reports on the June 2015 South Dunedin “flood event”, dated 30 Nov 2015 and 26 Apr 2016 respectively; and the third deals to comments (video recorded by Ch39 and published at DCC’s Youtube channel) during the DCC Infrastructure Services Committee meeting held on 26 April 2016. The reviews are published at this website – enter the term *johnstone* in the search box at right.

3. Neil Johnstone has requested that factual errors noted by DCC be made discoverable. DCC appears to be side-stepping qualification and quantification of its verbal assertions every which way.

4. It is highly likely that no expert external peer reviews exist or they would have been made public by now. More than a year after the “flood event”, we wait.

5. A peer review(s) is not something to hide. Why is DCC doing secret squirrel when challenged to substantiate its earlier comments (publicly stated on more than one occasion, recorded by mainstream media – for example, by Mayor Cull and Transportation’s Ian McCabe, who later resigned) – that external peer reviews of its formal reports did happen. After the fact is a little squiffy, if DCC is writing them now.

“Technical qualifications and experience with stormwater infrastructure design and management” are not provided. Rhetorical.

Holes being dug, an epitaph.

“Until quite recently I was the president of a major Otago sports club that has been operating since the 1870s. The club is located on Dunedin City Council recreational land.

The lease of this land very clearly stated that we were not permitted to hire out the facilities on this site for ANY commercial purposes. A breach led to immediate forfeiture of the lease. This was a condition that both this club, and others like it, adhered to.

It is adhered to because, penalties aside, this condition seems fair enough. The land upon which the club stands is leased for recreational purposes at what were, and are, well below the income that could be raised by the DCC for this publicly owned asset, had the land been zoned and leased for commercial purposes.

If anything the many rugby clubs in this town are even more privileged in terms of their subsidised occupation of public assets, as they have rooms that are on an even grander scale and sit in large and potentially very valuable areas of publicly owned land that are specifically contoured and laid out for rugby, and are maintained for this purpose at considerable public expense.

I am surprised that the DCC recreational leases for their facilities apparently do not contain similar blunt conditions to the one that my committee and I worked with. However, it is rugby, so perhaps I am not so surprised after all. Maybe the leases are rugby ‘specials’ or alternatively, the leases are the same and the apparently regular infringements are just winked at.

For rugby clubs to then maintain that they then have the ‘right’ to routinely operate these recreational facilities, that are largely provided and maintained by the the wider public, for their own commercial benefit, and thereby create a regular nuisance for said wider public within what are largely residential areas, speaks volumes for the ongoing and unreasonable sense of relative entitlement displayed by this small (and shrinking) subset of the community.

For those who become irritated by noise and other nuisances emanating from functions in nearby rugby venues, they may be well advised to acquire a copy of the DCC lease concerned to see if the club concerned are in breach of its terms, and what the penalties/remedies for any such breach are.”