Hospital food according to Gurglars

Late this afternoon whatifdunedin briefly visited Gurglars at Dunedin Hospital and within that time was able to confirm it was indeed he in an HD bed; that he comes with iPhone and iPad – we are now with photo evidence [loading]. Gurglars is in fine fettle for one poised to miss duck shooting season.
Whatiffers, join with us (telepathy will do!) in sending Best Wishes for Gurglars’ full recovery. The truth is he went mushrooming at Otakou yesterday —in so doing he suffered a calamity, meaning he missed out on fresh wild mushrooms, too. Gourmet horror!
Twas very nice to meet the gentle spy and seditionist Gurglars.

My recipe for filet de boeuf cordon rouge is a hit and my pumpkin soup brought me to Dunedin, I have dined on Vongole regularly and whilst some call me a gourmand I consider myself a gourmet!

So you can take my take on the SDHB food without a grain of salt or you can believe the photographs. [to come once technology sorted. -Eds]

I am unable to compare today’s food with the previous system because it is 30 years ago that I last ate it.

However my impressions of the Dunedin Hospital, the St John’s ambulance crew and the triage care has really opened my eyes to the dedication, work ethic and skill of the Hospital surgeons, doctors, nurses and carers that work here/there. An unquestionable 10/10 for every one of them.

However this is a food critique and I now know how Compass intend to make savings.

Dinner – small bowl of soup, palatable but made from a soup mix – 1 sandwich fresh but an unlimited use-by date, small in size, ham one slice, boiled egg part of – tea with milk.

Soup for dinner- half mast and PAP

Soup for Lunch not bad 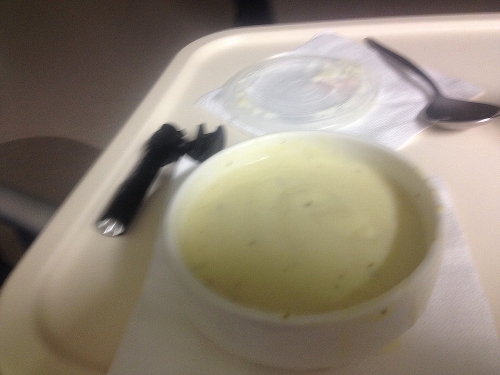 Compass’s savings will come from quantity savings, also I would guess if you added that lot together without labour cost the total would be less than $2. Total of slices of bread, 2 slices of ham, one butter, 2 marmalade, 2 heaped tablespoons of tinned soup.

Looks like I’m in here for another day or so, so an update is likely.

It’s official folks, the resident subversive who had to almost croak to get a chance to review the SDHB food has done it.

I understand I’ve been awarded the VC* for twice endangering my life in the service of my adopted country.

1. The beer and soft drinks were kept in the old English manner – sans Fridge, drunk lukewarm and VB was unavailable.

2. There was only one restaurant in Dunedin, the Huntsman which is still there and a tribute to steak lovers worldwide. There was La Scala but in those days it was a bit exxy for me. In other places in New Zealand the food was dreadful.

Fast Forward to the internet age and Dunedin boasts some three Michelin star quality eateries and a myriad of great food palaces where one cannot spend $10 for lunch and should be charged $50 for the quality.

So we come to Compass, think New Zealand just after the war, canned tuna, cooked to tastelessness with some frozen carrots and other mixed veges of a frozen variety and some boiled silverbeet stalks and two white sweet potatoes boiled to submission and some edible mashed potato. I was prescient when I said in report one that take what I said without a grain of salt or pepper or margarine or butter.

Pap has been mentioned and Pap it is.

Oh and I forgot the dessert (sweets to me). A bright green jelly that tasted as bad as it looked and a packaged icecream which is bloody hard to stuff up unless you do not freeze it.

Looks like Lime! Dessert
You wouldn’t swim in it for fear of contracting brucellosis 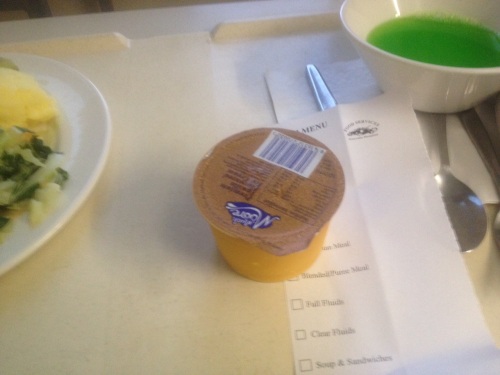 If I’m still here tomorrow and apparently that’s no surety they’ll have another chance, but one must say in finality a couple of conclusions–

Neither Mrs Coleman senior or junior can boil an egg and probably burn water and the Mr Coleman bill at Bellamy’s is a tribute to his parsimony because he doesn’t have a bloody clue what food should taste and look like to be palatable.

*The VC to those who do not know is the Valid Comment awarded only to those prepared to give their lives to truth and exposing the American Way (Now that Trumped you didn’t it!) 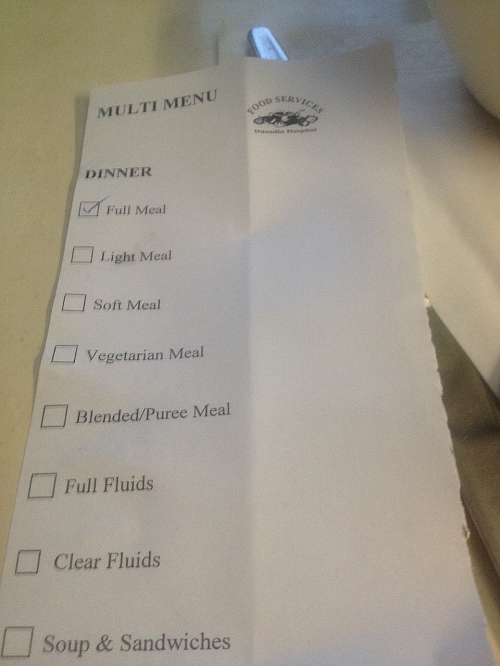 Menu showing FULL Meal relates to Tuna stew (have I spelled that correctly?)

whatifdunedin says: In the time before this CRIMINAL Compass Outfit came to bear the daily meal sheet was descriptive for each meal, and very tempting – and Fun – for patients and their families and friends to help complete. We exaggerate Not. The Compass printout for patients is APPALLING.

129 responses to “Hospital food according to Gurglars”