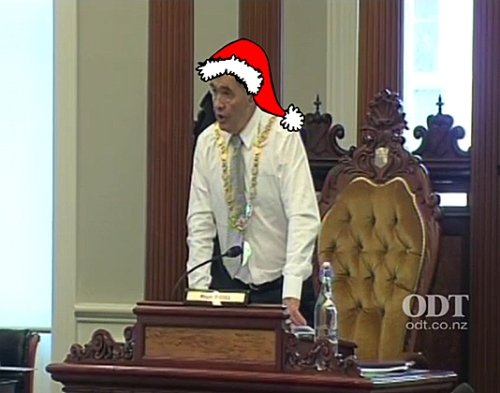 Mr Cull to Cr Vandervis: “You, sir, are a liar. Now leave.” [screenshot]

█ Message: Feel free to publicly contrast what I said to ODT reporter Chris Morris with what he said I said on today’s front page.

Not planning any action over Mayoral comments today because action over Mayor Cull previously defaming me as shonky’ finally got an unreserved apology from him but cost a lot of time and ratepayers money as did the farcical Code of Conduct sideshow. Shame that after all the evidence that I have provided especially what has been confirmed regarding my 2011 Citifleet allegations, that our new Procurement Policy still has not resulted in an independent Procurement manager position to oversee all individual managers’ contracting behaviour . Unfortunately my email programme died last Thursday and is still inoperative. Cheers Lee

### ODT Online Tue, 15 Dec 2015
Cull, Vandervis cross swords at council meeting (+ video)
By Chris Morris
A furious bust-up saw Dunedin Mayor Dave Cull call Cr Lee Vandervis a liar and order him to leave yesterday’s Dunedin City Council meeting. The extraordinary scene saw both men on their feet, their voices raised as they roared over the top of each other, before Cr Vandervis packed up in silence and left with a parting shot.
Read more