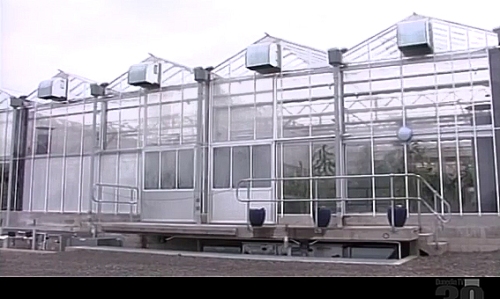 “In many ways the propagation and nursery facilities are the engine room of the Garden. This modern facility provides excellent conditions for plants as they are nurtured before going on public display around the Garden. This impressive new building helps us reinforce our reputation as a Garden of International Significance,” Mr Cull says.

The new propagation house was officially opened this afternoon at a civic opening with invited guests. An open day, at a date to be advised, will be held in spring so members of the public can tour the new facility. The new facility, on Lovelock Avenue, replaces the old and dilapidated glasshouses and plant nursery near the aviary. Work on the $6.2 million project began in October 2013 and the completed building was handed over in May this year.

Botanic Garden (Curator) Team Leader Alan Matchett says the new propagation facility provides the space and technology for the Garden to produce a more extensive range of plants from succulents and cacti, to alpines, tropical, subtropical, and ferns and orchids. The need for an updated facility had been apparent for some years as the former glasshouses, built in the early 1900s, began to deteriorate and the environmental management systems became less energy efficient and inadequate to produce the variety of plants needed by the Garden. The new facility provides about 600sq m of indoor space and has been designed to make the most of natural elements, such as the sun. Environmental conditions in the seven glasshouses can be controlled centrally to suit the different varieties of plants growing in each area. Watering and humidity levels are now computer controlled. The glasshouses can hold more than 12,000 plants, excluding seedlings.

As well as providing plant nursery facilities, the new building provides a base for education activities for school groups, public workshops and demonstrations. It also provides room for the Garden’s long-time supporters, the Friends of the Garden, to work. The new propagation house is the first part of a larger vision for that area of the Garden, which includes establishing a café, and visitors’ centre. Moving the nursery and glasshouses means the site they currently occupy in the upper garden can be developed to achieve its potential as a prime landscape feature.

### ODT Online Sat, 8 Aug 2015
Maintaining a living museum
By Craig Borley
There are public parks and public gardens with great collections of plants, but they are not botanic gardens, Dunedin Botanic Garden propagation services officer Alice Lloyd-Fitt said yesterday. Explaining why the garden needed a nursery and propagation facility, she said a botanic garden’s point of difference was its role as a living museum. Education, conservation and plant collection roles all mattered, and those roles could not be filled without a functional nursery.
Read more