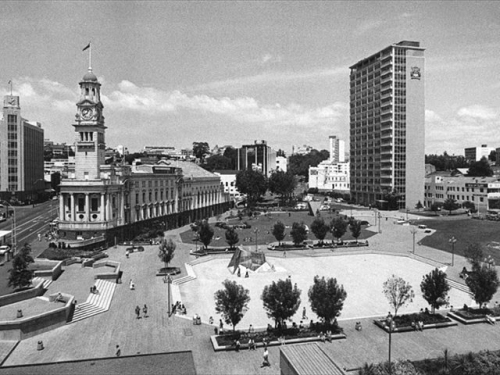 Photographer Patrick Reynolds says the Civic is an important building by an important architect – chief city architect Tibor Donner (1946-1967) – and it appealed enormously as “Hotel Moderne” with its modernist credentials.

### metromag.co.nz June 10, 2014
Urban Design
The Civic Building: Modernist Folly, Architectural Treasure
By Chris Barton
Why we should all be up in arms at the threatened demolition of the Auckland Council Civic Building.
There’s a surprise at the top of the hated Civic Building. From afar, you could guess there was some sort of observation deck, but the central roof-top courtyard open to the sky and to terrific east and west viewing across the cityscape to the harbour is a delight. Shut to the public since the 1970s, the restricted area is looking a little shabby, but one can easily imagine how the space could be brought back to life and, combined with a makeover of the staff cafeteria a level below, could be the tearoom talk of the town. Here might be a rare commodity in Auckland — public space on high — given that most other high places are either off limits, commercialised or privatised.
No 1 Greys Ave, formerly known as the Auckland City Council Administration Building, has plenty of other unique features: the rolled Corbusian corners of the metal-clad plant room, the curvy Le Corbusier-inspired entrance canopy, the mezzanine lobby and the precast terrazzo treads and iron balustrades of the open staircase.
Read more + Photos by Patrick Reynolds

### NZ Herald Online 11:51 AM Tuesday Nov 18, 2014
Bid to save NZ’s first skyscraper
By Bernard Orsman – Super City reporter
Plans to save New Zealand’s first skyscraper, the Civic Building on Aotea Square, or demolish it have been outlined to councillors and the media today. Council officers have been investigating options and market interest to refurbish the building, which will be empty by the New Year after serving as the city’s main civic administration building since 1966. The wrecking ball has been hanging over the building since the Auckland Council paid $104 million for the 31-storey ASB Bank Centre in Albert St for its new headquarters. The 100m tower was designed in the 1950s and completed in 1966. It has been criticised as an ugly box, but many architects marvel at its features. Architect Julia Gatley, an authority on modern architecture in New Zealand, has praised it as a beautifully proportioned, slender building that encapsulates modernism. It has no heritage status, but two reports have suggested it warrants a category A listing, and the council’s heritage division says it merits category B status. Heritage New Zealand also wants to see it gain heritage status and saved. The council’s property arm said without major refurbishment and the removal asbestos it would be unsuitable for council or other uses, such as commercial, residential and hotel. Auckland Council Property said it would cost about $78 million for full refurbishment to modern office and code requirements, or $60 million for a residential conversion. Demolition and site reinstatement is estimated at between $11.5 million to $12.5 million.
Read more 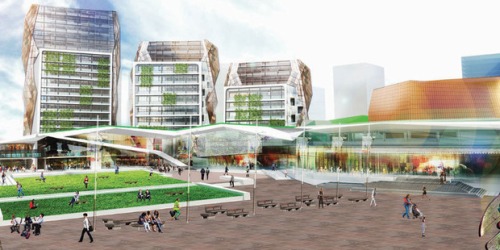