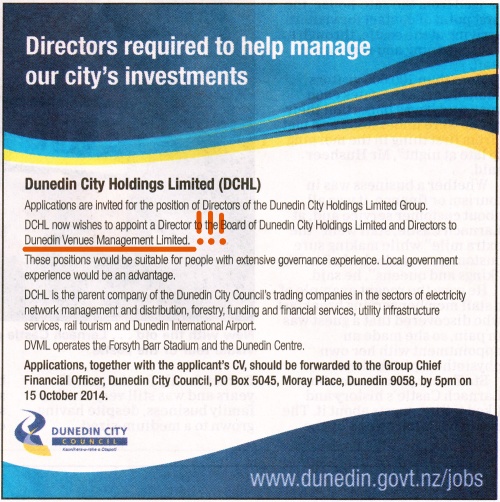 Is it our collective good fortune that “Don’t you know who I am?!?!” Sir John Hansen is ending his tenure as chairman for the sympatico boards of DVML and DVL?

Although, here is evidence that the Fubar Stadium GOES ON………..

We know public release of the Stadium Review initiated by DCC chief executive Sue Bidrose is pushed out until November. It’s all VERY messy, that nothing will DIE —regrouping the DVML board for the $20 million pa loss-making stadium won’t turn the structure into crushed aggregate and salvaged steel (for sale) at pumpkin hour.

A few bunnies will apply. We’ve had bunnies all along at DCHL —look what that’s cost Dunedin ratepayers and residents. Same applies for DVL and DVML. No change will happen while the stadium continues to drain the finances of Dunedin City Council under Liability Cull’s mayoralty of disasters and increased spending.

Dunedin City Holdings Limited (DCHL) has announced the appointment of two new directors to the parent company board and another two to its subsidiary company boards. More than 50 applications were received for the DCHL Board. […] DCHL Chair Graham Crombie says the new directors bring strengths that will add valuable skill sets to the boards they have been appointed to. “We needed people that could make informed business decisions, but at the same time complement the skill set of the directors already around the Board table. Following on from last year’s result we needed people comfortable working in a highly visible public arena to help us build on the excellent work done by the previous directors and maintain the forward momentum.”
Read more