Look out for more in the news… see Comments on this thread.
DCC Planner (name): Darryl Sycamore
Points at issue in the report will be raised at this site, independently.

Disclaimer: Elizabeth Kerr is not a submitter on the application.

█ The well-loved building is one of a group of significant structures listed in Heritage New Zealand’s Dunedin Harbourside Historic Area (List no. 7767)

█ District Plan: Located in the Queens Gardens Heritage Precinct (TH12) and the entire external building envelope is listed for protection in Schedule 25.1 (item B106)

### ODT Online Wed, 6 Aug 2014
Chamber resists apartment units
By Timothy Brown
The Otago Chamber of Commerce opposes residential development of a historic Dunedin building – arguing the proposal has shades of the costly and largely aborted harbourside rezoning. But building owner Russell Lund has struck back, accusing the chamber of ”knee-jerk nimbyism”.
Thirteen submissions supported the proposed redevelopment of the New Zealand Loan and Mercantile Agency Co Ltd building, while four were opposed and one was neutral.
Read more

Notification of Application for a Resource Consent – Under Section 93(2) of the Resource Management Act 1991.
The proposal is to convert and utilise the second (top) floor of the former NZ Loan and Mercantile Agency Co Ltd Building for residential activity. There will be eleven three-bedroom apartments and twelve one-bedroom apartments established within the existing building. The exterior of the existing building will have new glazing, windows, balconies, doors, entry and south light modifications. There will be ten on-site parking spaces at the corner of Willis Street and Thomas Burns Street for residents’ use. […] The proposed residential activity within the Port 2 zone is considered to be a non-complying activity pursuant to Rule 11.6.4. The modification of the building is considered to be a restricted discretionary activity pursuant to Rules 13.7.3(i) and 13.7.3(ii).

A detailed set of location maps, plans and an assessment of effects are provided with the application. The application has been submitted with an acoustics report.

█ Read more, including application documents at the DCC webpage 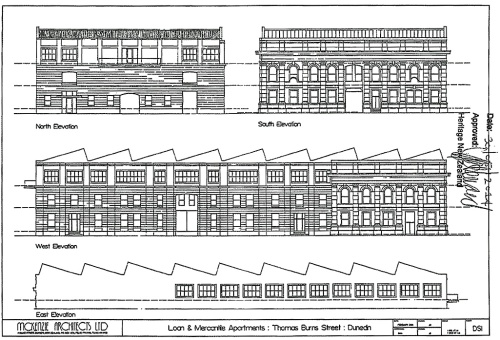 █ For more, enter the terms *loan and mercantile* or *harbourside* in the search box at right.