### dunedintv.co.nz April 14, 2014 – 6:46pm
Hotel may be dead in the water
Dunedin’s multi-storey harbourside hotel appears to be dead in the water.
Just before this bulletin went to air, development company Betterways sent a copy of a letter noting a memorandum of understanding deadline had passed.
The company signed the memorandum with the council earlier this year, amid hopes the $100 million project could find a way forward. That followed a DCC resource consent committee decision not to allow the hotel.
Betterways director Jing Song told 39 Dunedin News the project was over. She said she was left speechless by the council’s lack of communication.
Ch39 Link [no video available]

HURRAH HURRAH HURRAH
Hmmm, wonder how much that just cost the ratepayers???
Or was this just a little timing hiccup because of the Royal Tour.
Will Daaave go begging, again.
From the start Betterways has been acutely useless at Communication.
Was never going to be a sound investment. Jing should be thanking Us.
But is it true.
Dunno, read tomorrow’s ODT…. 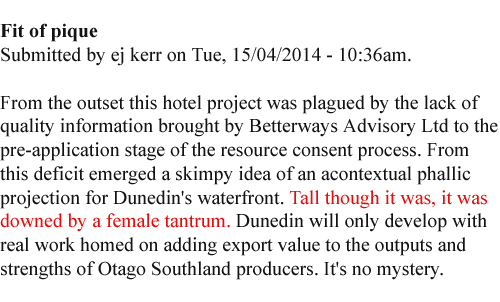 ► For more, enter *hotel* in the search box at right.