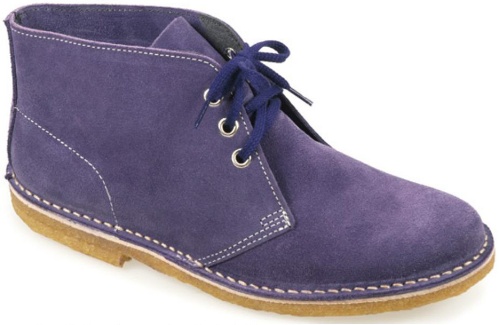 Dunedin desert boots, made under the fashion radar

The first McKinlays factory was set up in Dunedin in 1879; the patriarch, William Robert, came from Kilmarnock in Scotland. McKinlays kept it going until the Depression of the 1930s, when the business, along with so many others, went bankrupt. They started up again in 1939, and now they’ve outlasted almost every New Zealand shoe factory that was going back then.

### stuff.co.nz Last updated 05:00 26/05/2013
Based on a shoe story
By Rosemary McLeod – Sunday Star-Times
I bought the first pair – black – a couple of years ago, and went back straight away for the mauve ones. How comfortable. How cheap. How clever I was to make this discovery. This year I bought the deep yellow pair, but what I’d really like is all the colours, lined up neatly in my wardrobe. […] McKinlays have been making them steadily for years, and they’ll probably be making them for many more years yet, just under the fashion radar. This year there’s purple, as opposed to my mauve, for example. There used to be a bolder green. The wonder of it is, they’re made in Dunedin. The only other hands-on shoemakers left in this country since deregulation are Last Rite (workboots), Minnie Cooper (trendy, cute ads), Sole Shoes (cheap) and Paraflex (industrial work boots).

All McKinlays shoes are made from cowhide. They’re turned out on old-style factory equipment which is now irreplaceable; the new equivalents, Italian-made, inevitably, are only good for huge production runs for huge markets. That’s no good for a business that, beside its usual production runs, makes shoes for people with problem feet, one pair at a time – as well as shoes for hobbits, on request.

It’s not a big factory; nor is it flash, but McKinlays turns out 40-50,000 pairs of shoes a year here, Graham McKinlay tells me, some of them green blokey boots for the Australian defense force. The biggest sellers are a jodhpur boot called Hunter. They’ve been making 3000 pairs of those every year for the past 25 years.
Read more

*Photo: stuff.co.nz
This story makes me smile. From my apartment I can see McKinlays shoe store on George Street, through the trees of Knox Garden.