Where House ? Adaptive reuse in the warehouse precinct | Open Lecture Tuesday 14 May

Where House ?
Adaptive reuse of buildings in Dunedin’s warehouse precinct 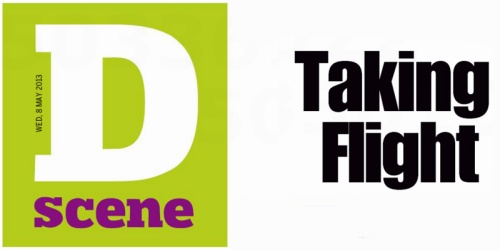 THE CONUNDRUM
DScene could fall victim to the disease rabidly attacking the Fairfax Media conglomerate. How to deal with the local monopoly, should the war have been fought online, not on paper.

### ODT Online Fri, 10 May 2013
D-Scene newspaper may close
Dunedin community newspaper D-Scene may be ceasing publication after five years. The Fairfax Media-owned The Press reported yesterday a proposal to close the weekly publication, a subsidiary of The Southland Times.
Read more

### 3news.co.nz Fri, 10 May 2013 11:03a.m.
Dunedin’s D-Scene paper tipped to close
By Thomas Mead, Online Reporter
Fairfax Media is considering ending the popular Dunedin community newspaper D-Scene, putting eight jobs at risk. The media conglomerate has put a proposal to staff and is now deciding the fate of the weekly publication in a two-week consultation period with those affected. Southland Times general manager Sue Gregory is declining to comment until the consultation period is over, but confirmed the initiative was underway. D-Scene was purchased by Fairfax Media in September 2008, but is in a competitive environment, up against the well-read Otago Daily Times and weekly The Star.
3news Link

### NZ Herald Online 5:30 AM Friday May 3, 2013
John Drinnan: Local history shipped out
History has a price and New Zealand’s photographic history is being shipped to Little Rock, Arkansas. Veteran sports photographer Peter Bush is shocked by Fairfax Media’s decision to sell its newspaper photo archive to an American firm. Fairfax has told Auckland staff it will be shipping photo archives for most of its Australian and New Zealand newspapers to the Rogers Photo Archive, a company based in Little Rock. The company will send back digital versions of the photos, but will keep the original prints, including photos of Sir Edmund Hillary.
Read more

### stuff.co.nz Last updated 13:59 09/09/2008
Fairfax buying Dunedin community paper D-Scene
Dunedin community newspaper D-Scene looks set to join the Fairfax stable with the media giant announcing it is in the final stages of buying it. A spin-off from Queenstown’s Mountain Scene, the paper was set up earlier this year in a market dominated by long-time incumbent, the Otago Daily Times.
Read more

### nbr.co.nz Tuesday September 09, 2008
Fairfax buys a lemon
By Mitchell Hall
Fairfax media’s decision to buy Dunedin’s struggling free weekly newspaper D Scene has one competitor sniffing that there’s no business case for the purchase – given how much money it is said to have been losing. The Otago Daily Times is the oldest newspaper in the country – and one of the last independent newspapers not owned by APN or Fairfax. The ODT’s business manager (and Allied Press director), Nick Smith, says a large editorial team designed D Scene with the Otago Daily Times in their sights. “The Otago Daily Times was seen (by them) to be an old and staid paper circulating in a one horse town. “They decided that the ODT was something that – according to their sales people – was a relic from the past, and they were smart boys who’d done all this research and they can take the town over.”
Read more

CHRISTCHURCH —This means to see the All Blacks play at home against the best opposition, we have to build a stadium that is almost double the size of what we really need just for one event per annum.

The former chief executive of the council-owned VBase events management operation, now working in the private sector, offers his perspective on the debate about a new stadium for Christchurch.

### stuff.co.nz Last updated 08:39 10/05/2013
Opinion
‘Boutique’ stadium a better option
By Bryan Pearson
I follow the various discussions around stadiums and venues with interest, and thought that the following might help inform that debate. The most recent issue to surface in this debate is about co-location versus integration. If we are simply co-locating other facilities like offices, hotels, and so on, adjacent to the stadium (as shown in the design where there are standalone buildings at each end of the stadium itself) then, while it will add life and activity to the stadium precinct, it will have little if any impact on the stadium business case.

If we are talking about integrated facilities and design which reduce the cost of building the stadium and/or deliver non-event regular income streams for the same cost/investment, then it will improve the stadium business case.

The latter sounds attractive until you start to consider the operational challenges of fully integrated facilities where the 24/7 tenants are effectively displaced on event days. Of course, then there is the issue of supply and demand for commercial office space and accommodation. Already we are seeing large city fringe commercial developments (Victoria St, Lincoln Rd). Then there is the central city where some developments are under way but many developers are already struggling to build the business case due to high costs of construction and soft demand once you get beyond about $400 per square metre.
So where will office space adjacent to the stadium fit in a market which is already showing signs of weakness and over-supply? The reality is the only thing that truly impacts on stadium viability is commercial event days.
Read more