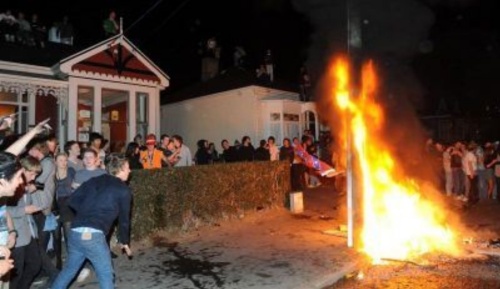 ### ODT Online Mon, 25 Mar 2013
Students blame authorities
By Rosie Manins and Eileen Goodwin
Drunken disorder in the student quarter is being exacerbated by police and council intervention, university students and Castle St residents say, citing a Saturday night incident as a classic example. At least one private Castle St party was shut down by a Dunedin City Council noise control officer about 10pm, forcing people out of the flat, on to the street.

$$$ ● About 300 people had gathered on the street by 11pm, when four Dunedin firefighters arrived in an appliance to extinguish two couch fires.
$$$ ● The size of the crowd prompted them to call for a back-up appliance and crew from Roslyn, as well as for police attendance.
$$$ ● At the same time, four Willowbank firefighters in an appliance were called to a Dundas St mattress fire.
$$$ ● They were finished in time to respond as back-up in Castle St, so the Roslyn crew was stood down, then immediately called out to back up a St Kilda crew, attending a fire in Harrow St.
$$$ ● In total, seven furniture fires were extinguished in the student area on Saturday night.
$$$ ● More than a dozen police officers, including a dog handler and two paddy wagon crews, arrived in Castle St to disperse the crowd about midnight.

Dunedin Mayor Dave Cull said if people’s behaviour on private property was excessive and had to be curtailed, it made no sense for them to assume such behaviour in public was acceptable.
Read full article 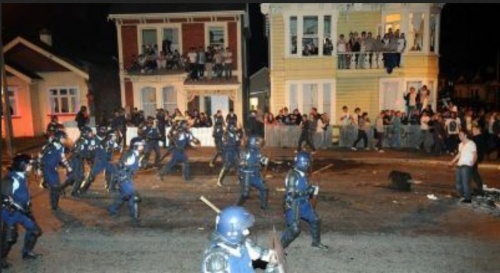 What do we think of OUSA…
Close down the Hyde St party never to return?

### ODT Online Sun, 24 Mar 2013
Moves to increase safety at Hyde St keg party
By Vaughan Elder
The Otago University Students’ Association has settled on a range of measures to make this year’s Hyde St keg party safer, including a ”one-way” policy from as early as 2pm. An estimated 5000 people attended last year’s party, which was marred by 15 arrests, the collapse of a roof overloaded with partygoers and 80 people requiring treatment by St John. The OUSA has been looking at ways to make this year’s April 13 party safer. OUSA president Francisco Hernandez said apart from limiting numbers, it had settled on a range of measures, including a ”one-way door” policy, with non-resident party-goers who leave the street barred from returning. It was also looking at making it a 10am to 5pm party, he said.
Read more