### ch9.co.nz February 22, 2013 – 6:48pm
Government disagrees with councils’ claims
The southern community could be up for a $1.8 billion bill for earthquake strengthening. The claim has come from Dunedin Mayor Dave Cull, speaking on behalf of ten councils from Timaru south. But the Government has called his announcements to the media unhelpful, and accused him of punching at fog.
Video

Dunedin City Council Media Release — 22 February 2014
Southern Councils Highlight Major Concerns Over Earthquake-prone Buildings Proposals
Southern communities could face a bill of almost $1.8 billion under proposed changes to rules governing earthquake-prone buildings. Dunedin Mayor Dave Cull says that councils accept work needs to be done on this issue in response to the tragic events in Christchurch, but that any changes need to be flexible, risk-based, practical and affordable for building owners and communities.
Read more

With less than a week to go before nominations close on 1 March, the DCC has received 33 nominations for significant trees to be included in the second generation District Plan.

The nominations cover a range of tree species including totara, magnolia, pine, a variety of beeches, rhododendron, oak, elm, macrocarpa, chestnut, eastern dogwood, and walnut. Approximately half of the nominations are for native trees. In several instances, a mix of native and exotic species on a property has been nominated.

“A totara tree nominated on Portobello Road is believed to have been where boats were tied up to transfer passengers and supplies as they travelled from Port Chalmers to Dunedin.”

Having a tree listed on the Significant Tree Schedule does not mean that the tree cannot be touched, rather that when doing normal maintenance on the tree, the property owner applies for a free resource consent that ensures the maintenance is professional and beneficial for the health of the tree. Grants towards the costs of maintenance are also available from the DCC.

There have been six groups of trees and several individual trees nominated which are on properties that are not owned by the nominator. In these cases, the DCC will contact the owners to determine their view on the nomination.

Following the nomination period, each tree will be evaluated against criteria relating to the condition of the tree, its amenity characteristics and any other important values it has (including stature, and historic or scientific value), as well as considering other aspects such as age, height, function and occurrence of the species, and any negative factors.

If the tree meets the criteria, it will be included in the draft Schedule of Significant Trees which will be notified to the public with the rest of the draft second generation District Plan for public submissions.

All enquiries should be addressed to Landscape Architect by phoning 477 4000 or emailing planning@dcc.govt.nz

Resolution to Exclude the Public
To be moved: “That the public be excluded from the following parts of the proceedings of this meeting, namely, Items 18 -19.

[As relates to the previous and current meeting rounds, Property Matters and FIFA under-20 World Cup 2015.]

### Stuff Online Last updated 17:03 20/02/2013
Probe launched into pokie grants
By Michelle Robinson
Search warrants have been executed up and down the country as part of an investigation into pokie machine grant manipulation. Internal Affairs director of gambling compliance Debbie Despard said the investigation was significant, involving a number of agencies including the Serious Fraud Office. No details on the amount or search warrants or their location were made public.
NZ Community Trust [of Wellington] confirmed it has been contacted by the Department of Internal Affairs and Serious Fraud Office over alleged manipulation of gaming funds. The trust has issued a statement saying it does not believe it is the subject of the enquiry.
Read more

Internal Affairs confirmed today search warrants have been executed as part of an ongoing investigation into alleged manipulation of gaming machine grants. The operation also involved the Serious Fraud Office.

Director of Gambling Compliance, Debbie Despard, said this is a significant, joint-agency investigation.

“The Department of Internal Affairs has responsibility to ensure the integrity of the grants system in pokie machine gambling. The wider community is disadvantaged if one group can gain preferential access to grant funding from gambling proceeds. Where the Department finds serious, harmful, and deliberate non-compliance in the gambling sector we will hold people to account. Our ability to do this is enhanced by drawing on the specialist resources of the SFO.”

Information is still being gathered and the investigation is on-going. The Department will continue to assess any further information it receives in the wake of today’s action, Debbie Despard said.

In the meantime the Department will make no further comment on the current investigation.

### DScene 20.2.13
End of the line? (page 1)
The famed Carisbrook sports ground has found a buyer, but the deal seems unlikely to derail criticism of the sale process. See page 3.

Mayor won’t confirm or deny details of sale (page 3)
By Wilma McCorkindale
Dunedin Mayor Dave Cull will neither confirm or deny the possibility the city has made a deal in lieu of an immediate cash sale for Carisbrook. Cull said he could not comment on reports a joint venture between the Dunedin City Council (DCC) and construction company Calder Stewart is incorporated into a deal for the sale of Carisbrook – the sale of which was announced a week ago.

‘‘I can’t confirm or deny the detail,’’ Cull said. ‘‘There are details in there but as far as I’m concerned it’s a sale. Many sales of property have conditions and this one is no different from that. ‘‘What I’m saying is I can’t divulge those because they are commercially sensitive at the moment, confidential. As far as I’m concerned in the big wash-up this is a sale of that property to Calder Stewart.’’

Two critics of Dunedin City Council have this week laid formal complaints to the Office of the Auditor-General and asked it to incorporate the Carisbrook sale into its current investigation of council-related property deals.

DScene asked Cull if Calder Stewart was paying for the ground upfront in cash once the sale went through. ‘‘I didn’t say that,’’ he said. ‘‘I just said it’s a sale to Calder Stewart. The details of how they pay for it are part of the confidential part of the details. I can’t comment on that.’’
{continues} #bookmark

Editorial: Council secrecy creates bad blood (page 8)
By Mike Houlahan
Announcing a conditional sale to an anonymous buyer for an undisclosed amount was never going to be a sustainable position.
{continues} #bookmark

### ch9.co.nz February 19, 2013 – 6:59pm
Nightly interview: Dave Cull
The Carisbrook Stadium hit the news last week, when it emerged building company Calder Stewart had put in an offer of $3.3 million for land. All sorts of figures have been bandied about in the media in relation to the sale of the ground, which was bought by the Dunedin City Council as it developed Forsyth Barr Stadium. Mayor Dave Cull joins us to shed some light on the issue.
Video 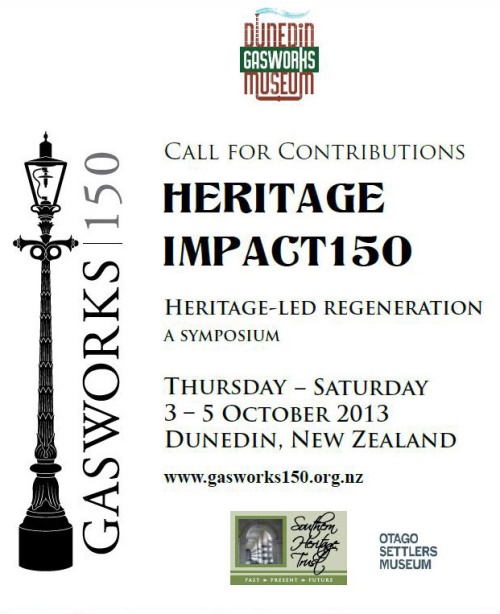 AN IMPORTANT HERITAGE EVENT FOR OCTOBER 2013
2013 marks the 150th anniversary of the first production of town gas in New Zealand. This event took place at the Dunedin Gasworks which operated from 1863 to 1987, being the last gasworks to close in New Zealand.

The Gasworks played a significant role in Dunedin’s industrial, economic and social growth during its operation.

Today the Gasworks Museum forms a distinctive part of Dunedin’s industrial legacy and raises important issues about how industrial heritage can be sustained in the light of national and international experience.

As part of the celebrations the Dunedin Gasworks Museum Trust is planning a series of events to commemorate the significance of this anniversary.

1. HERITAGE IMPACT150 – Industrial Heritage SYMPOSIUM
A three-day event to be based at Otago Settlers Museum. The symposium will bring together people with expertise and an interest in industrial heritage including archaeologists, architects, archivists, curators, engineers, historians, local government leaders, planners, sociologists, and those involved in tourism, heritage maintenance and restoration.

2. GASWORKS150 – Community FESTIVAL
The festival supported by funding from the Dunedin City Council will bring together the Dunedin community to celebrate the anniversary at the Gasworks Museum. The event is in its initial planning stages and will have an art and cultural focus including a celebration of dance, art and photographic exhibitions. There will be a market day, museum open days, and a competition for senior secondary school students involving an Industrial Heritage research project.

The Call for Contributions to the Industrial Heritage Symposium HERITAGE IMPACT150 can be downloaded at www.gasworks150.org.nz

What Can You Do To Help?
1. We have a wide distribution network based on our database, if you know of anyone or any organisation that may be interested in the symposium please ask them to contact us or visit www.gasworks150.org.nz
2. Talk to colleagues and help distribute news of the symposium and associated events.
3. Submit a proposal for contributions before 31 March 2013.
4. Encourage colleagues to join our newsletter list.