See comments at this thread:

“What Heydary found came as a shock, especially to some buyers who readily admit they were so blinded by the flash and cash of Donald Trump that they didn’t do proper due diligence: Buyers weren’t purchasing so much a condo as a share in a high-end hotel that, so far at least, is losing money.”

Anonymous provided this edifying read. It ‘trumps’ what happened with the first tower built at Orewa, and the Spencer on Byron at Takapuna (referred to elsewhere at What if?, or google) – as far as 41 Wharf Street, Dunedin is concerned the tower-scam model is the same. So here we are, naive and wide open to the wiles of our own ‘good old boys’ and their unsavoury quest for a share of dirty-quick money from fickle overseas ‘connections’, and your life savings too.

### ODT Online Wed, 21 Nov 2012
DCC report opposes city hotel
By Chris Morris
Plans for a 28-storey waterfront hotel towering over Dunedin have been dealt a blow by a Dunedin City Council report that criticises the design and recommends resource consent be declined. The report by council planner Lianne Darby, made public yesterday, identified the hotel’s height and dominant appearance as among areas of concern. A host of technical worries also raised doubts, ranging from traffic problems and shading to a lack of information about wind gusts magnified by the tower’s height. Ms Darby’s report left the door ajar by including a list of detailed conditions to impose if consent were granted, despite her recommendation.
Read more

Note to graphic: Under the Resource Management Act (RMA) the commissioners to hear the application cannot consider the economic viability of the proposed hotel project – the matters with a red cross, at right, fall within the scope of the Act. The applicant is required to show the adverse effects of the proposed development are no more than minor.

‘New information’ about the hypothetical footbridge cannot be considered at hearing since it was NOT included in the notified application.

### ODT Online Tue, 20 Nov 2012
Hotel developer unveils link bridge proposal
By Chris Morris
The man promoting Dunedin’s proposed 28-storey hotel has unveiled plans for a “world class” pedestrian and cyclist bridge that could provide a missing link to the city’s waterfront. However, the idea is only the “starting point for a discussion”, with key details – including how much the sweeping structure would cost and who would pay for it – yet to be confirmed, Betterways Advisory Ltd director Steve Rodgers said.
Read more 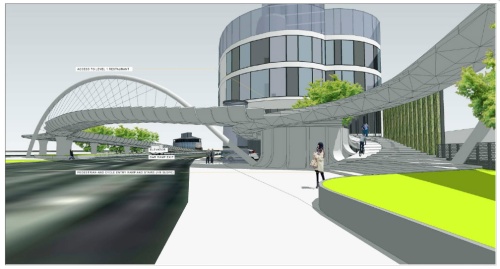