Ridding DCHL of conflicts of interest, Otago business monopoly ‘by director’, and other ghouls

### stuff.co.nz Last updated 05:00 12/08/2011
Council votes to revamp City Holdings
By Wilma McCorkindale – Southland Times / D Scene
The Dunedin City Council has voted to accept radical recommendations in a confidential report that slams governance of its holdings company. Mayor Dave Cull last night said the council was seeking legal and accounting advice on how it could implement the measures suggested by the report’s author, governance and business leader Warren Larsen. Mr Larsen suggests a radical overhaul of governance of the council-owned holdings company Dunedin City Holdings Ltd and a review of the “fit” of its subsidiary companies to council requirements.

The Dunedin City Holdings board should be “entirely reconstituted”, it said, recommending three externally sourced directors for an initial three-year term. All should be independent and drawn from a New Zealand-wide recruitment search, initially beyond the Otago region. Ideally, there should be an increase in the pool of women directors and “younger, high-potential, competent directors”.

Building facade failure: “It’s only the facade at the front that can’t be used”

What is building performance monitoring, cyclical maintenance, restoration and structural repair? Or, read: Good stewardship of the built environment is eroded by owners inclined to apathy and hands-off neglect, while they continue to extract rents from tenants.

Not helped by the Dunedin City Council’s half-baked street improvements scheme for King Edward St, South Dunedin, led by ‘feel good’ inexperienced staff. This scheme puts money to the likes of unsympathetic paintwork (destroying patina of age), ugly street furniture, and traffic management plans – rather than to the means of generating funds for building conservation, first and foremost to preserve heritage values and the community’s enduring ‘sense of place’ as the basis for future development and economic return. 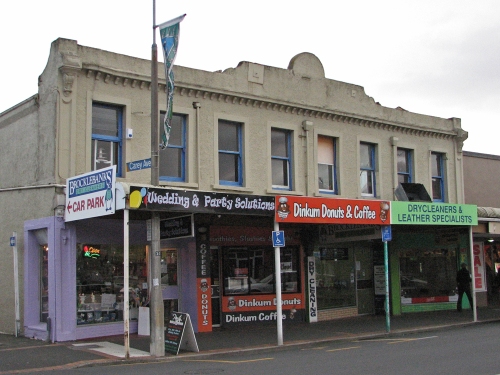 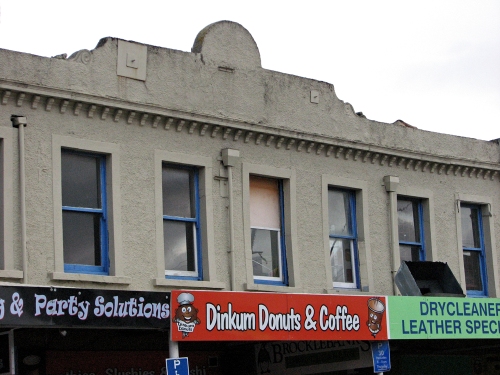 ### ODT Online Sat, 13 Aug 2011
South Dunedin building facade unsafe
By Nigel Benson
A south Dunedin building was closed by the Dunedin City Council yesterday and is likely to be condemned after its facade was discovered to be cracking and leaning. The building, on the corner of King Edward St and Carey Ave, houses four businesses; Fine Art Mounting, Dinkum Donuts, Feedback burger bar and Brocklebanks Dry Cleaners.
Read more