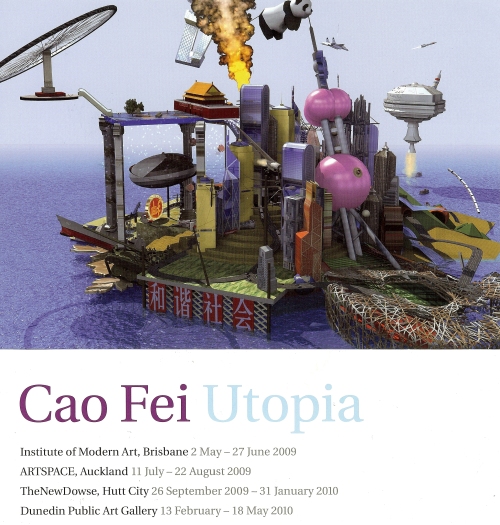 Amazing! Catch RMB City: A Second Life City Planning by China Tracy 2007-09, and other ‘urban’ works in the Utopia exhibition.

The large single channel video projection at the Art Gallery holds the superb detail and layering of Cao Fei’s 3D animation. Watch how the Birds Nest stadium and other architectural icons play out in the frenetic assemblage of the ‘live’ city.

“RMB City will be the condensed incarnation of contemporary Chinese cities with most of their characteristics; a series of new Chinese fantasy realms that are highly self-contradictory, inter-permeative, laden with irony and suspicion, and extremely entertaining and pan-political.”
-Artist statement

From Dunedin Public Art Gallery publicity:
RMB City was created by Cao Fei’s online identity China Tracy (with her platinum hair and suit of armour) on the Creative Commons Island of Kula. Named after Chinese money, RMB City shows a perverse view of Beijing—a blend of communism, socialism, and capitalism. Like Beijing itself, it is constantly under construction, candy-striped smoke stacks suggest continuous industrial production and ships move goods swiftly in and out of port. A giant shopping cart, filled with skyscrapers and religious monuments, floats nearby; and Tiananmen Square has been converted into a swimming pool.

He would be right. More than that, he has generously passed to the other side!

### ODT Friday 19 March 2009 (page 12)
Letters to the editor
Challenge to silent majority
By Phil Handcock, Andersons Bay
I am a reluctant stadium supporter – very reluctant…But, since the rate collectors have motgaged our future on this project, I have stopped being part of the vocal minority and join the silent majority – those that truly believe that this is a visionary investment. Now that I have joined your group, I realise that I have no idea who you are, or where you are. So, I am proposing that we meet and become the visible majority. I am suggesting that this Saturday we all meet at Carisbrook…
{continues}

The full letter is available in print and digital editions of the Otago Daily Times.