### ODT Fri 11 Dec 2009 (page 8)
In brief: Stadium climber charged
Brisbane: A woman who free-climbed Queensland’s Suncorp Stadium because she was “bored” has been charged with unregulated high-risk activity.
A police spokeswoman said the woman, believed to be a 22-year-old student, had been seen climbing the wall by a passer-by at 4.49am yesterday. -AAP

Available in print and digital editions of the Otago Daily Times.

Related posts:
Q: How tall is the stadium?
Can we do the main span like Auckland Harbour Bridge?

Q: How tall is the stadium?

A: Thinking taller than Otago House? Look it up for yourselves, people. We discussed the height earlier at What if? As Stu mentioned, the crawler cranes provide a clue.

The stadium will be a lot taller than most of you think, in contrast to everything else around it – except the quarry.

You know the nice view you get from your house in Waverley over to Water of Leith and Leith Boat Harbour? That will be completely, utterly, dramatically CHANGED when the stadium gets capped. There’s a university word.

Which brings me to the proposed design of University of Otago’s new building on University Plaza. Architects Warren and Mahoney have produced a really interesting design concept, in visual, material and experiential terms. We look forward to public release of the graphics.

A world away, there are much taller things than the stadium to think about.
Has gardens, reads like a stack of salad plates. 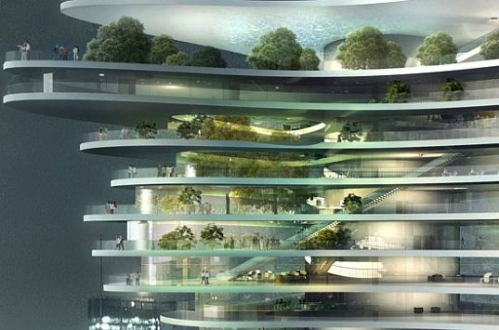 ### Dezeen December 10th, 2009 at 12:54 am
Urban Forest by MAD
By Natasha Lyons
Beijing architects MAD have designed a skyscraper for Chongqing, China, with gardens at each level. Rather than consider the project vertically, the architects envisage a stack of floors, each slice shifted horizontally to create spaces for gardens and patios. The 385 metre-high building will be called Urban Forest.

In October 2009, The Urban Forest from MAD debuted in the Heart-Made, Europalia exhibition at the 2009 Europalia China. It represents the most challenging dream of the contemporary Chinese architecture — a type of urban landmark that rises from the affection for nature. It is no longer a static icon but an organic form that changes all the time with people’s perception.