There must be an election coming up as the incessant groans of the discontents such as Vandervis and Smith are in full flight once again in the letter to the editors.

None would be surprised by me taking the bait and having my own little grumble about a certain Mr Smith.

It seems the fellow has strong objections to the suggestion the Dunedin tempt the Edinburgh Tattoo away, or hold our own here in Dunedin.

Firstly let’s correct some blatant errors. The Scots did not give us the word Daft like he claimed.

(source, http://www.etymonline.com/) But this was just one of many that state the word cones from Old English. And if you are a geek like me and have read the Story of English and are currently watching that brilliant series by Melvin Bragg based on the book, you will appreciate that Old English is not Scots or Pictish.

The second blatant error is to again use that tired and boring Pork Pie, that this is a ‘Plastic Tent’.

That aside, I agree that it would not be the same setting as the majestic Edinburgh Castle. But considering that ‘the lone piper’ played splendidly from the roof of Carisbrook some years back for an All Black test. It had the same effect on me, spine tingling and tear evoking. If it was good enough to stick the piper on the roof…

The rest of his rant is so pathetic as to actually require a warm fire tonight and this page us the first I will crumple up.

Yes fireworks can and have been used successfully in indoor arenas, I have witnessed it first hand – without a single sprinkler going off.

Why will Howitzers going off in the FB stadium render the audience deaf but not at Edinburgh? Sorry sunshine if there are pyrotechnics (not the main point of the event) they will not harm the fuel installation many hundreds of metres away – more absolute bollocks!

Further if it was good enough for the ordinance to be man(or woman)handled at Westpac Stadium in 2000 when it was the first place on the world to lure the event away from Edinburgh Castle, then it will be good enough here in Dunedin – sans flagstones.

As I said I’ve heard some utter tripe from Mr Smith, and the ODT have been more than obliging in publishing his rubbish, this however is right up there.

As stated if it was good enough for that northern ‘Edinburgh of the South’ to host the Edinburgh Military Tattoo, I would say, YES it is well within the realms of possibility that we host it, or even a South Pacific version more appropriately.

{sorry if there are offending grammatical errors, I’m on the go with the iPhone}. 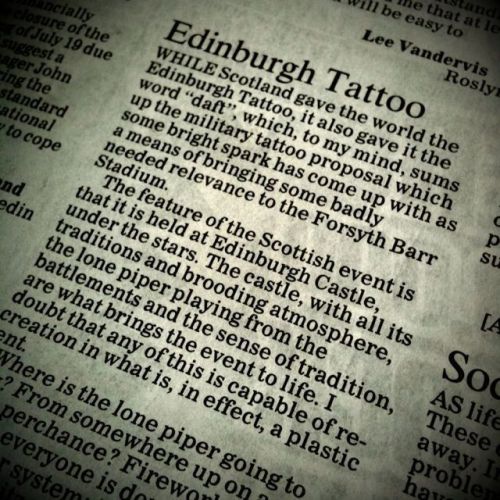 For those who visit and/or participate in this public forum on the Stadium, you will appreciate that I will accept a wide range of opinions from both sides of the camp. This is good for a robust conversation about this development.

However this is a timely reminder that although I set this site up as a forum for free and frank discussion, I do not have the time to check every single comment made on this site, and thus it is a place for people to moderate their own conversations – just as you would if you were talking face to face with people.

Unless you have the facts 100% correct about someone in particular (with the result that your comments could be defamatory), I would respectfully request that you keep your comments and thoughts to yourself. If you have checked these facts and continue to believe them to be true, and then in the public interest you wish these to be published, by all means contact me first.

I do not have the time to fend off lawyers because some are prepared to make cheap throw away lines. Unfortunately if we are unable to do so, I will be forced to close comments on this site.

Come on folks, you are all aware of the rules of life.

Have a great day, cheers

Filed under Hot air, Other, Politics