My God they are relentless…. 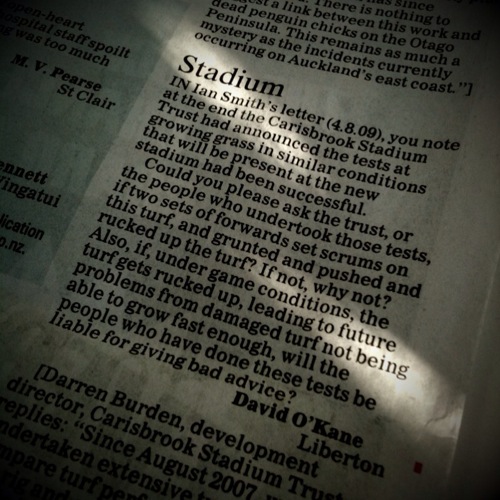 I mean really, where does David O’Kane get off in that section of the ODT commonly known as Grumpy Kiwi central, moaning about the stadium turf.

It’s that line “If Not, Why Not”. The bloody smug arrogance of it. It smacks of that famous Dunedin anti-stadium affliction, “I know all the answers and the CST hasn’t thought of anything”.

It screams of, “I bet the CST hasn’t even considered this” mentality, and it’s bloody boring people. We’ve all heard it before with countless ‘the public knows best’ comments. However I would have thought this sort of stuff would have died down by now. Argh!

I did like the response from the CST though, essentially it was “yawn, yes we have tested this, and we did consider putting down scrum after scrum, and yawn, yes we did test placebo strips of grass…”

Once again the man in the street knows best eh.

July 2010 is shaping as an important milestone in construction of the Forsyth Barr Stadium in Dunedin, as the city’s new venue is negotiated along the road to the Rugby World Cup 2011.
Read more

CST’s stadium progress report (24 July 2009) is an attachment to the Stakeholders Report and alludes to the Rugby NZ 2011 tournament requirements.

Dunedin could add to its reputation as the Edinburgh of the South, with plans to host a “Dunedin Tattoo”, with performers from around the world. Carisbrook Stadium Trust officials have begun discussions.
Read more

CST’s stadium progress report (24 July 2009) is an attachment to the Stakeholders Report.